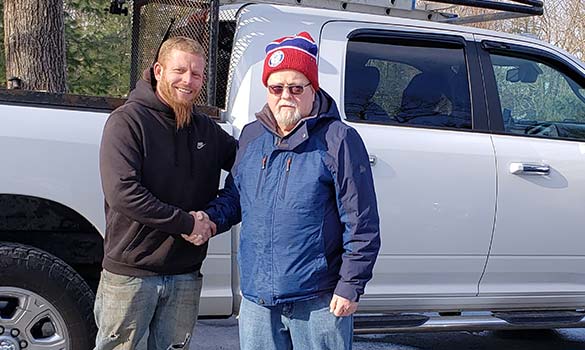 Founded in 2005 by Bill Arsenault, William Arsenault Contracting, LLC is a family-owned and operated roofing contractor serving residential homeowners in Londonderry, Manchester and throughout the Hillsborough RH County. A small business that can accomplish big things, we pride ourselves on quality workmanship and honest communication on each and every project we undertake.

Get to Know the Owner

Bill Arsenault was born in a small factory town in western Massachusetts in 1950 to a working-class family. As a child, he learned early that you worked for what you wanted, and respected others and their property. He bought his first bike, at five, from an older brother for ten dollars, which he earned by selling blueberries door-to-door. He bought Christmas presents for his Mom, Dad, brothers and sisters by making and selling wreaths to neighbors and friends. He and his two brothers worked at their father’s high-volume gas station, starting at early ages (Full service — every hood was popped and every fluid was checked!). It was then that he learned the importance of good customer service. By the time he was a teenager, he knew and understood about Horatio Alger and the American Dream.

At a very early age, Bill knew he wanted to go to college. He was inspired and influenced to become educated by two people: his oldest brother and an older brother of his best childhood friend. They would tell him stories of how an “A” in high school interpreted into a “C” in college, and how the professors were often the authors of the books they were teaching. This mesmerized Bill.

In high school, although an underachiever, Bill was the President of both The Student Council and The Future Teachers of America. He now knew that he wanted to go to college to become educated, and to educate others. To this very day, he likes to say: “I majored in English because I was naturally good in Math.” He wanted the balance of being an educated man. After college, he taught for two years but decided he needed a bigger classroom.

In 1974, Bill worked for a dear friend who was an architect and had just started his own business. This is where his interest in construction was tweaked. After doing this work for a period of time, Bill’s life took him into the business world. By applying his work ethic and education, he began building businesses, predominantly in New England, into successful profit centers. During this time, Bill got married and had three children. By the mid-eighties, Bill was divorced and became a single dad. He won physical custody of the children and his life took, yet, another turn.

Bill was now in a position where he learned that business and life had to be intertwined, and one must always be cognizant of which one must take priority. Today, Bill brings this profound understanding, integrity, hard-work ethic and respect for others to his own company. He is an accredited member of the New Hampshire Better Business Bureau (Torch Award Winner), Cambridge Who’s Who Executive, Professional and Entrepreneurial Registry, as well as a contributor of many local organizations and charities. His pledge to you is this: “I shall do unto others as I would have them do unto me.”

I would not hesitate to recommend your company to anyone seeking an honest, reliable, quality firm. It was a pleasure doing business with you! — Bob & Cathy C.

We complete every job as though it were for ourselves.